What is a Feng Shui Replacement Star chart?

What is a Feng Shui Replacement Star chart?

Feng Shui is very specific about a building facing certain directions. Every 15-30 degrees the Feng Shui changes. The intersection of the 8 major compass directions is called a void line.

For instance, the direction of 202.5° is NOT a good direction to face because it is on the borderline of two trigrams, called a major void line (in this example, between south and southwest): 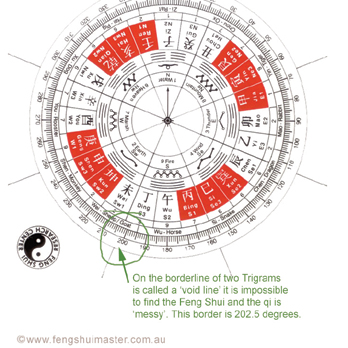 When I find a client with this borderline problem, I sigh…If the house is really on a void line, it requires a Replacement Stars Chart.

In this case, the classics say, “The qi is messy and evil.”

Is this really true? What happens in such a case?

In my 25+ years experience I have not had many cases of TRUE Replacement Star charts. The reason why I say ‘true’ is because there are teachings that say if a house is even close to the borderline, say 3 degrees either side, then it is still a replacement star chart.

As my teacher, Master Yu would say, if there are 360 deg in a circle and there are 8 borderlines between trigrams, and each trigram is 45 degrees and requires 6 degrees either side, that means 6 x 8 = 48 degrees of the compass should be allocated to replacement star charts! That is 13.333333333333% – which is way too much 🙂 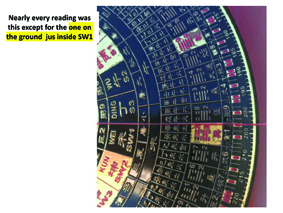 How does it affect the occupants? They are also influenced by this ‘messy and evil’ qi, their lives will reflect this with unusual behaviour and unusual occupations.

For instance, I had a client years ago whose house was on a void line. Fortunately for them, they didn’t live in the house full-time, and moved between two houses. Still, the clients exhibited unusual behaviour:

Of course we can put these behaviours down to other factors, but it definitely was extreme and confirmed they were under the influence of ‘messy and evil qi.’

Another replacement stars house was bad in other ways:

The replacement star combination 1 and 4 was at the front door, which in a normal chart indicates ‘love and romance’ or, ‘art and academic success’. However in this case, being replacement stars, the clients:

My most recent case of a major void line house is on the Gold Coast, Queensland. The client purchased the block in a beautiful new subdivision, without checking with me first. They asked me to design the Feng Shui of their intended new home.

At the time I was in Japan so I used setcompass.com to take a compass reading of the property. Most of the time setcompass is very accurate, using google maps; but in this case, as the borderline was so close…

I am always wary when the compass reading is so close, so I called a colleague to get a second opinion. They took a reading using their software and got a different reading to me by about 10°!

There was another hope as the survey map indicated the land is on an angle of 24°47,30″, putting the site into the northeast-southwest orientation. The declination (difference) between true north and magnetic north on Gold Coast is 11°15,36″. Surveyors usually use True North, not Magnetic North, so I endeavoured to call the surveyor at Gold Coast council to discuss it further. I couldn’t get in touch with the surveyor, so the best course of action for me was to go to the site to take a reading.

I was on my way back to Australia via the Gold Coast to Melbourne so I changed my ticket to give me 4 hours in transit. As it was from international to domestic transfer, I was able to leave the airport and take a cab to the site for the reading.

As it turns out, because of COVID, the airport refused to allow me to leave, so I was stuck there in transit for several hours and paid extra for the opportunity!

When I landed in Melbourne I asked my colleague to go to the site for me and take an actual compass reading. It turns out their reading was the same as my original setcompass reading, so I knew what had to be done now.

If it is found that the land faces a void line, the way to fix this is to build the house on an angle to avoid facing this direction. In this case the angle should be either towards the south more or towards the southwest more. This depends on the star chart, which direction is better: 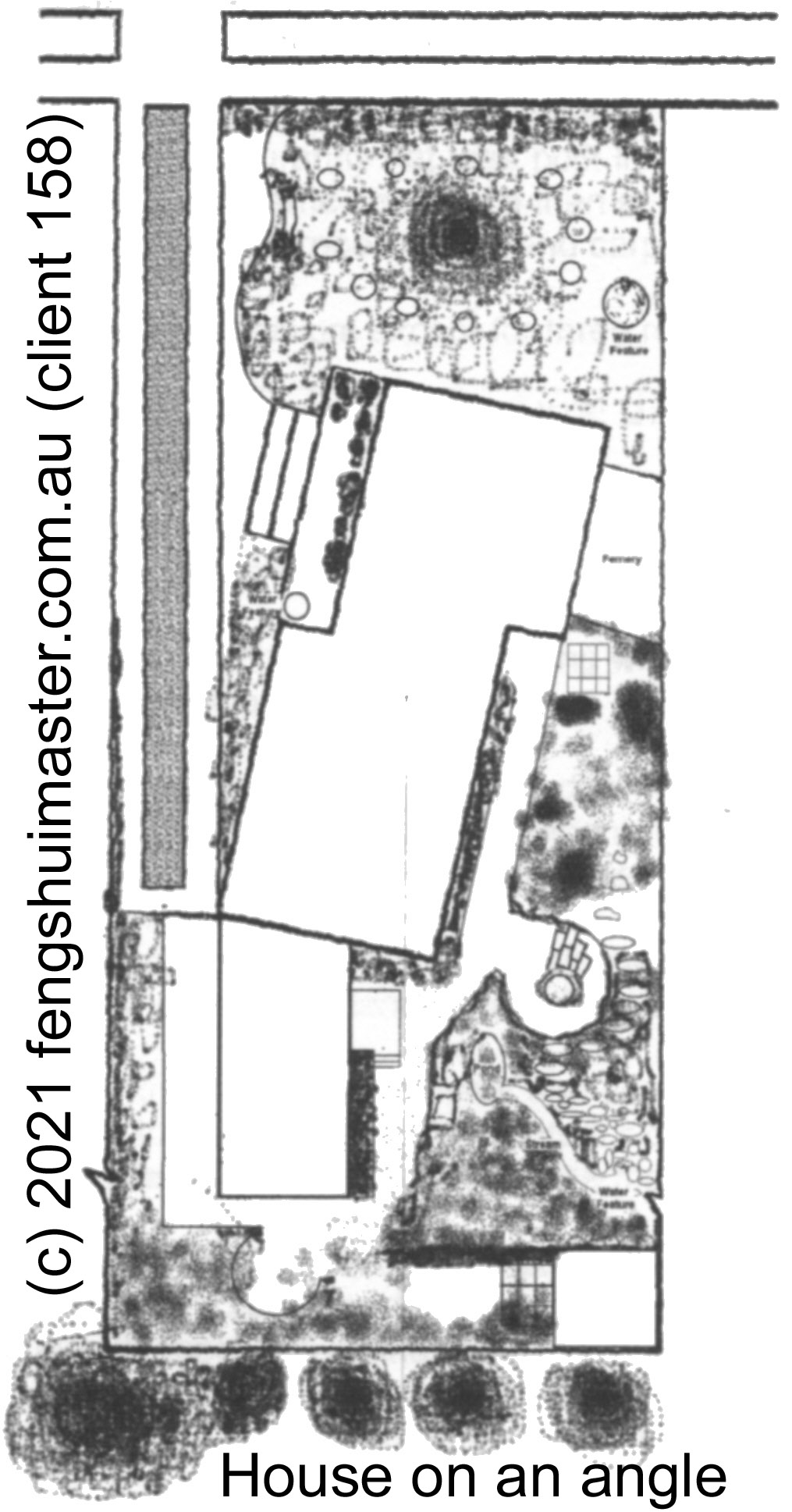 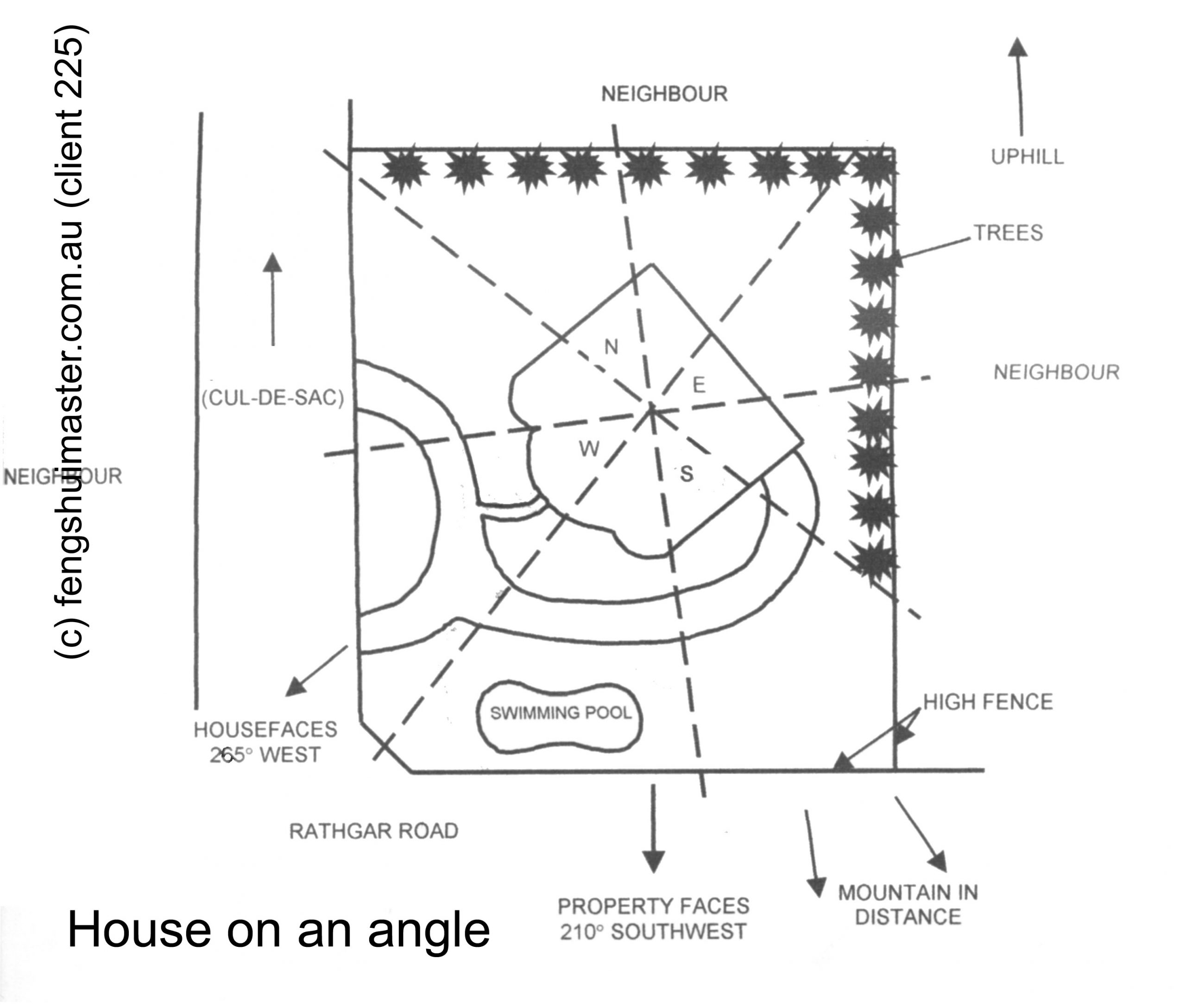 As we are approaching Period 9, it is vitally important that the house is good for now, and also for the next twenty-year cycle after 2023.

Sometimes the developers of a new subdivision will specify that the houses must be built in a certain way, or have the same coloured roof, or no front fence, etc. in order to be uniform with the neighbours. This may restrict the builder from building on an angle. Plus, if the land is long and narrow then the house needs to be downsized or designed to fit the width of the block: 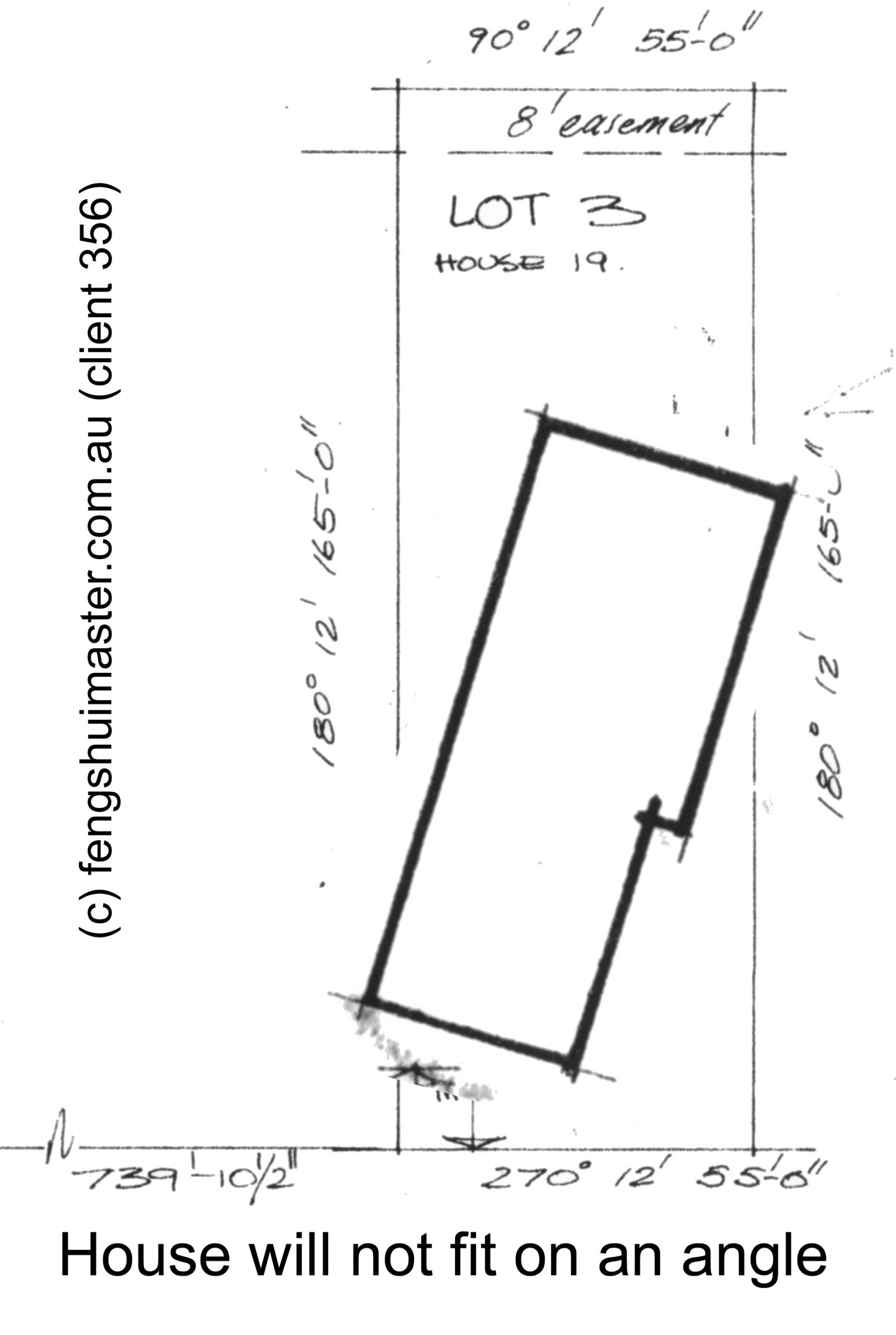 I advised my client on the Gold Coast that if they cannot build the house on an angle, then they should sell the land, despite the fact that other factors (such as the environment and water location) are favourable: 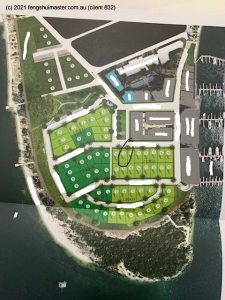 In the sitemap above you can see that the shape of the land is ’embraced’ by water which can be good for wealth. The developers’ map shows that the lot in question is close to, but not directly opposite a street. In Feng Shui, in general we don’t like to be at the end of a T-Intersection, however that is not always the case, sometimes it can be beneficial to bring the qi directly to the site.

I have seen houses built on a void line where the occupants suffer unforeseen circumstances, physically and psychologically affecting their well being. I wanted to avoid these types of outcomes for my client.

A few months later, after much consideration, my client decided to go ahead with the build. They sought a builder and chose a floor plan, sending it to me for evaluation: 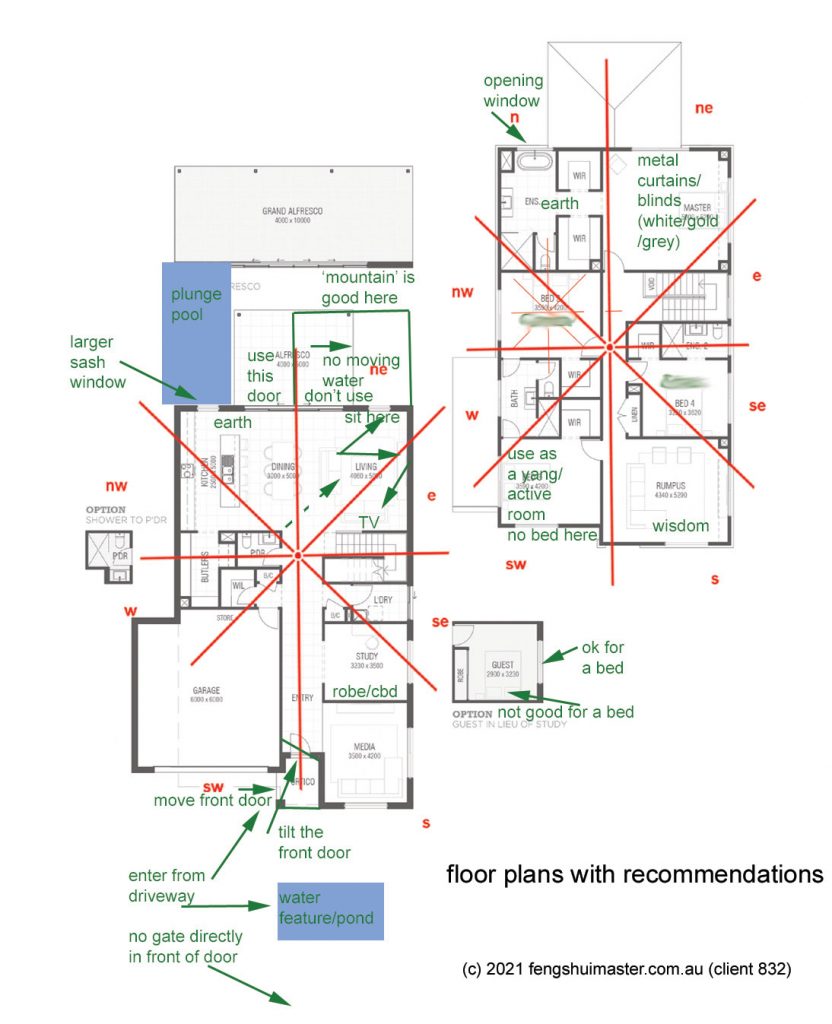 See how the front door is right in the middle between south and southwest. In response to this, I suggested:

…so that the qi from the southwest could enter. This would avoid the problem of having two types of qi entering the door.

It turns out that the client decided against using this builder and we are now working on the third set of plans. It seems like the ‘messy’ qi is working well already.

PS While I’m still in Queensland I will be conducting a site inspection/workshop and invite students to attend. Please book here or contact me for further details.