Some observations of dunnies, throne rooms, loos and wc’s in China

Some observations of dunnies, throne rooms, loos and wc’s in China

Here are my thoughts on the topic of throne rooms in Feng Shui.

On the subject of throne rooms in old Chinese homes, here’s a couple of examples of where to find them.  Both are now museums in Hong Kong and the New Territories: 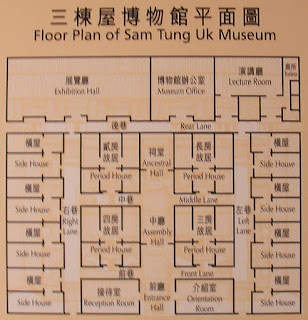 This is a small walled village in Hong Kong.

The main body of the plan is the central area of activities for village members coming together for meetings and Ancestral Worship.  Each family lives in the small homes located in either ‘Period House’ or ‘Side House’ areas.

Here is the interior taken from the door, the mezzanine is the sleeping area and the eating/possibly also sleeping is downstairs.  Just to the right of the door, the dragon side, out of view is a space with a small half-wall.  This was the location of the wc.  It was not a hole in the ground but rather some type of receptacle or ceramic bowl, which was used, then the contents disposed of outside (ie there was no plumbing).

This is the home of a wealthy family in the New Territories.
On the floorplan above to the right is a long passageway, this is the boundary of the main house and the annexe with indoor-outdoor kitchen and wc under a separate roof.  The annexe has a separate entrance and can also be accessed from the side door of the house.

I suspect the wc’s at the back were used only by servants, but I could be wrong.

In the old days the wealthy occupants of a house often had a ‘potty’ in their room which would be then carried out by the servants.
Have you seen the film The Last Emperor?  He also had a ‘potty’ (what we used to call a ‘gozunder’ sic because it ‘goes under’ the bed).  After use the contents would be examined by a doctor to ensure the Emperor was in good health and eating correctly.

When the wc is located under the same roof as the house then it also occupies one of the ‘palaces’ of the house and according to Flying Stars this will be either a good sector, be neutral or have some negative stars there.

This is a reason I suspect, why the wc’s in Tai Fu Tai Mansion are located outside the house; thereby not harming any of the good stars, whilst at the same time a practical reason of sanitation and odour. 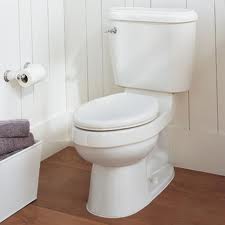 Toilets in modern city homes in Western countries are located inside and form part of the interior structure of the house/apartment.  They are not the smelly places they used to be and can be decorated quite beautifully.

In modern Feng Shui it is often said, ‘Keep the toilet lid down and close the door.’  This is a Feng Shui fallacy.  Lid down and door closed are two different things.

When the wc is located under the same roof as the house then it also occupies one of the ‘palaces’ of the house and according to Flying Stars this will be either a good sector, be neutral or have some negative stars there.

Located in a good sector is a waste – the toilet/bathroom areas are not used that often to take advantage of the good qi there.  Good stars require either activity or a nice yin room.  If the toilet has a good water star, the door should be left open to allow the good water star to travel to other parts of the house.

If the toilet has a good mountain star I see no reason why this can’t become a very comfortable place to sit!  Albeit not as good as a lounge or bedroom because we can’t sit there forever to enjoy the good star…

If the sector with toilet/bathroom has bad stars it’s better; we can’t expect to have good stars all throughout the house unless we design the house using Feng Shui in the first place.  However, when we prepare ourselves in the morning we still like the bathroom to be in a reasonably good or neutral area as we do not want negative stars to occupy our activities.

If the wc is there, keeping the door closed is a good idea, locking out negative water stars from coming into the house.

At the same time flushing with the lid up is better because it can ‘drain’ the bad water star.  Although I find this a controversial topic because the act of ‘flushing’ creates yang qi from the movement of water, so it may activate a water star but only for a brief time.

3.  Flush with the Lid Down

Finally, we hear in Feng Shui, “Flush with the toilet lid down or the ‘wealth’ will drain away.”

If we have a good wealth star in the toilet then it is just unfortunate.  Lid up or down will not really matter, it is just bad for wealth,  We prefer a good star to be at our front door instead. 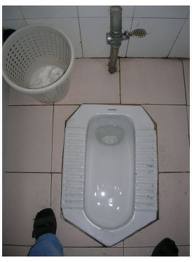 Also, some say flushing with the lid up is not good for our health, preferring to have lid down so as not to breathe in the water vapour.  Asian style toilets have no lid for the wc.  Can we say that Asians have more sickness than Westerners?  I don’t think so!

So in conclusion, when studying Feng Shui I always like to refer to what happened in the past and see what can be applied now.  We can see from the old houses that toilets were either outside of the house, or not an actual place with water flushing qi.

In modern times we moved the wc inside, so now we have to find a place to put it!  Ideally don’t put it in an area of good water star or mountain star, and don’t worry about flushing with the lid down!

These are some of my random thoughts about loos, any feedback is welcome.