When we think of Feng Shui, in the main what springs to mind are toilet seats, golden frogs, love and finance corners of our homes.  There is, however, a far more intricate and involved world of principles, formulae, mathematics (and what we call metaphysics) evolved over thousands of years.

Some of the basic principles of Feng Shui include, ‘don’t leave the toilet lid up or your finances will drain away…,’ ‘don’t have the front door aligned with the back door,’ ‘don’t have mirrors in the bedroom,’ and so on. Most of these are based on sound Feng Shui principles.

The word ‘principles’ is the key here, rather than ‘rules.’ Just as no two people are the same, no two houses are ever quite the same. There are some schools of Feng Shui that say every house has a wealth sector in such-and-such a location, health in such-and-such and so on. By now most people are familiar with this style of Feng Shui. This simplified style of Feng Shui has helped to spread the word about this vast body of knowledge around the world in a way that no complicated approach could ever have succeeded. So this school must be commended for its accomplishments.

Still, there are many skeptics who scoff at this basic approach and for good reason; as it is not reasonable to suggest that each house should have the same set of values and yet the lives of the occupants and their experiences vastly differ.

So, as no two people are the same nor are two houses the same and circumstances for the occupants must change from place to place.

However sometimes, what seems like the perfect environment, can inexplicably bring unhappiness to people’s lives. This is where the space, combined with the time factor and Feng Shui calculations comes into consideration.

Traditionally, Feng Shui is based on the space in which we live and also the time in which we happen to be living there.

Firstly taking the space into consideration, it is the external and internal features of a property that are analysed from a Feng-Shui-mind. The most important external features are the locations of ‘mountains’ and ‘water’.

Mountains of course represent real mountains, hills, sloped or terraced land and can also be other buildings, skyscrapers and on some occasions, brick walls.  This is the yin aspect, the still, quiet, protective and inactive quality.

Water is in opposition to mountains; being the yang aspect such as rivers, roads, pathways, the ocean, lakes and any movement and activity, which would also include wide-open views from a balcony, for instance.

In fact, the words ‘Feng Shui’ mean ‘wind water.’ In an ancient Chinese classic, the Book of Burial by Guo Po, “Qi rides with the wind and is dispersed, but it is retained when it encounters water.” Qi is the environmental energy that we want to invite into our homes to nurture our happiness, health and prosperity. For this reason, according to Master Joseph Yu, “A most fortunate site has water and then a site that caches the wind.” So we see that wind and water both bring good Qi to a site. Of course they need to be in proportion.  If a site has too much water, such as rough waves pounding the shore, then the Qi is washed away; just as if a site is too windy, Qi cannot be retained.

The features we look for in the interior space include the layout, or floorplan of the building; the location of the front door, back door and windows, the pathways that lead into and around the inside of the house and importantly, what compass direction does it face? The compass reading is determined by using a traditional Chinese Luo Pan; a compass which comprises many symbols and characters shown as layers, or rings around this ‘Feng Shui calculator.’

Then to complete the equation the time factor has to be determined.

The most successful, popular and accurate school of traditional Feng Shui is the Xuan Kong Fei Xing Pai, literally translated as Time-Space Flying Stars School. As the name suggests, Feng Shui changes from place to place and also in time; and in this school the time cycle is every twenty years.

There’s 9 Periods totalling 180 years, they are:

Notice that the Chinese calendar begins on 4-5th of February; this is the Solar Calendar. There’s also the Lunar Calendar which in 2004 commences on January 22nd. That’s when Chinese New Year is celebrated.

You can also see that Period 7 is nearly over and we loom at the edge of an exciting time in Feng Shui as we move into Period 8.

This change will see major shifts in the Feng Shui of homes and in the lives of many people.

Period 7 has seen the rise of young women in politics, public speaking and communication; ruthless transactions, destruction, revolutionary ideas. An ancient Chinese classic says, “People can prosper in medicine and divination” which explains why medical breakthroughs and metaphysics have been promulgated in this Period.

As number 7 is destructive in nature we find the breaking down and exposing of many things including sexual deviant behaviour and the breakdown of a number of country’s corrupt political regimes. This destruction has not been altogether negative, but rather has paved the way to harmony being established.

As we move into Period 8, the emphasis will shift. The number 7 will be out of its age, like a President who has lost the election, and the number 8 will become the new President.

In period 7 we found the rise of people who were good communicators, but not necessarily the best authorities in their field. Yet they were able to become famous through the power of their own speech and marketing campaigns.

Period 8 will see people who are crafty, handy and inventive; so native craft, natural fibres, stonemasons and people who work with their hands. As the number 8 symbolises a mountain and ‘keeping still,’ so people will return to a lifestyle choice of back to nature and generally less hustle and bustle; meditation, yoga, Ashrams and introspective personal quests will rise.

Country and seaside property values will also be on the rise as people’s lifestyle choices and priorities change and we see a return back to living in harmony with nature and the natural world.

We say in Feng Shui that the best site has a mountain to the rear and water at the front; this is a basic balance of yin and yang respectively. The mountain supports the site and emanates good earth Qi towards our home, supporting our health, personalities and personal relationships. The water, which can be real water, a road or an open space, represents yang qi that is brought towards our home from the front, nurturing our wealth and prosperity.

In traditional Feng Shui, when a house is constructed we focus firstly on the location, which includes how the roads, rivers and pathways lead to our home; and secondly on the compass direction of the location. Based on the compass direction and the date of construction a chart is drawn up of a building, which determines the type of Qi that is ‘captured’ within the building once completed.

DRAW UP YOUR PLANS

Draw a plan of your house. Using an accurate compass, stand at the front of your house and measure which direction it faces. eg:

Mark the centre of your house and allocate the locations; think of it like an apple pie, each direction takes up a 45° slice (it’s more accurate if you can use a protractor). 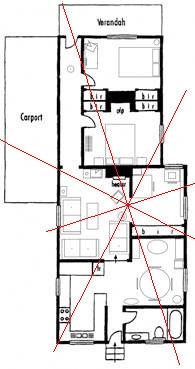 The ideal location changes in time. For Period 8, the ideal location has a mountain to the North East of your house and water to the South West. These are called the Zheng Shen and Ling Shen locations respectively; as in the following diagram:

The mountain needs to be a real mountain, not a building; and the water can be real or ‘virtual’ water; so it can be the ocean, an inlet or a cul-de-sac or intersection of two streets, for instance.

If your house faces South West and sits to the North East and has mountain and water in the right place then you will be in a good position to enjoy good prosperity (from water) and health (from the mountain) in Period 8 (until 2024).

If your house is not facing the South West, but if you still have water in the South West and a mountain in the North East, it can still be good for you.

A SELECTION OF BUILDINGS FROM VARIOUS AGES

Following is an introduction to how the Feng Shui of a building can affect the occupants in Period 8. This is generic information; the external and internal forms of a property and the location of mountain and water must also be considered; together with other factors in the chart, the annual influences and the dates of birth of the occupants. Certain houses will enjoy very good Feng Shui in Period 8. There are 216 possible charts for all the Periods (not including special circumstances).

Here’s a sample of a few…

COMMENTS:   The occupants will apply themselves to making money, will find good opportunities and will be in control of their wealth provided their front door is at the front of the house. The mountain location in the North East sector is the best area for the bedroom. 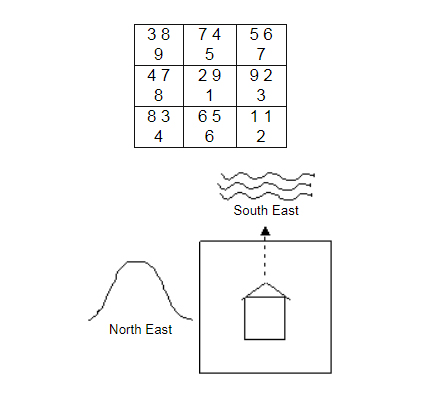 COMMENTS:    This chart has a good feature and can be good for all periods.  The people will work hard to make money and be very successful provided the front door is in the North East and there are no large or heavy objects (such as other buildings) obstructing the front.  The very back room of the house (in the South West) is not good for health or wealth and needs to be avoided and a metallic sound should be added as a cure.

COMMENTS:    The opportunities are good for making money provided some red colour is added to the entrance hall area.  The occupants will maintain their income, so they will be financially secure.  This will come at a price though, as health is not as well supported unless there is a bedroom in the North East.  The man of the house may spend a lot of money on romantic entanglements. 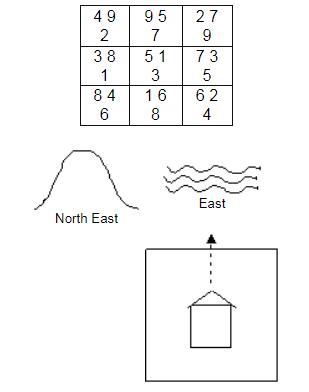 CAN YOU RELATE TO ANY OF THESE EXAMPLES?

HOW HAS YOUR LIFE BEEN IN PERIOD 8?

Send me your feedback, I’d love to hear from you.