Billionaire sells Sydney mansion for $22.5m ‘due to bad feng shui’Let’s take a look why:

Fig Tree Point is a point of land jutting out into Sydney’s Quakers Hat Bay. Directly opposite the point is the location of the house in question: 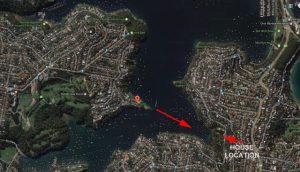 The spit of land creates what is called in Feng Shui a ‘poison arrow.’

Perhaps the Chinese property developer purchased the home with the intention of buying it, but didn’t check the satellite image first, or perhaps he forgot to check with his Feng Shui master!

In fact the spit may not be as bad as thought, even though from google it does look serious. It all depends on how clearly it can be seen from the house and how close it is. As we can see there’s actually quite a long distance between the house and the spit, and in between is a beautiful bay to capture the qi.

Perhaps the new owners have purchased a bargain…There are yet other factors to consider, such as the age of the house and the compass orientation. Only then can we tell what type of qi is being brought sharply to the site!